Question: Imagine that the year is 1928 and the scientific world is in an uproar trying to determine what c…

Imagine that the year is 1928 and the scientific world is in an
uproar trying to determine what component of the cell isresponsible
for genetic inheritance. Is it DNA, protein, perhaps even RNA?

You are busy in your lab, trying to help solve this crucial
mystery that still plagues (then) modern day biology. Your work
focuses on a microorganism, a bacterium named Streptococcus
pneumoniae, and its effects on mice. There are two strains of
S. pneumoniae (which is responsible for pneumonia), the
“Rough” strain (R) and “Smooth” strain (S). The strains are very
similar except the S strain has a smooth polysaccharide coat that
enables the microorganism to avoid the organism’s immune system and
cause illness (and death in mice). The R strain has a rough coat
which is detected and dealt with by the immune system (and as a
result causes no death in mice).

You decide to perform a series of experiments using the R and S
strain of S. pneumoniae involving injections of these
strains in mice. Your results are documented in the figure
below: 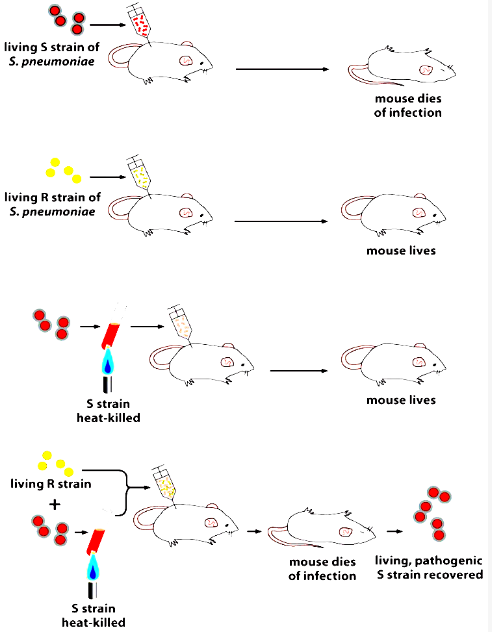 From these results, you figure out that something from
the heat killed S strain is transforming the R strain into the
virulent strain.

What is this “Transforming principle”? Is it related to the
cellular component that was passed from one generation to the
next?

As you know, this was the initial experiment performed by Dr.
Frederick Griffith that eventually led to the discovery of the true
cellular component that is the genetic inheritance molecule as well
as the “transforming principle” (Hint: It’s DNA!).

1. Several experiments were required to demonstrate how traits
are inherited. Which scientist or team of scientists first
demonstrated that cells contain some component that can be
transferred to a new population of cells and permanently cause
changes in the new cells?

b. Watson and Crick

2. From your results, which one of the cellular components can
be determined NOT to be the component responsible for genetic
inheritance? Why?

a. Proteins because these macromolecules become denatured with
heat.

b. DNA because these macromolecules form a single helix in
solution.

c. RNA because it’s double stranded 100% of the time

3. Which one of the following experimental trials below are
considered to be controls for this experiment?

4. Which scientist or team of scientists obtained definitive
results demonstrating that DNA is the genetic molecule?

5. Hershey and Chase used radiolabeled macromolecules to
identify the material that contains heritable information. What
radioactive material was used to track DNA during this
experiment?

6. DNA molecules, like proteins, consist of a single, long
polymeric chain that is assembled from small monomeric
subunits.

8. There are five different nucleotides that become incorporates
into a DNA strand.

9. Hydrogen bonds between each nucleotide hold individual DNA
strands together.

Complete a Strategic profit model for your selected method of shipment;

END_OF_DOCUMENT_TOKEN_TO_BE_REPLACED

Describe the project value: The value should describe the benefits of the change project implementation to the stakeholders,

Describe the project aim: The project aim should include examples of features and functions that will occur as a result of implementing your change...

END_OF_DOCUMENT_TOKEN_TO_BE_REPLACED

Demonstrate an understanding of developments in globalisation within the context of contemporary practice in supply chain management and in so doing...