This is a fatigue detection system implemented in smartphone. This system will detect the drowsiness of the driver while he is driving. And if the reverie is detected by the system then it will generate an alert. In this the parameters are blinking of eyes, mouth yawning and head shaking. Head shaking is the new parameter which is used in this system. These parameters are calculated to identify driver’s weariness. The Canny Active Contour method is used for detecting yawning and the Harr-like technique is used for detecting face and eye blinking.

Now a days because of the reverie and fatigue of the drivers daily the huge amount of accidents are occurs which becomes the reason of deaths, injuries, etc. For preventing accidents it is essential to monitor the fatigue and vigilance level.

With the help of various active safety systems we can monitor the fatigue of driver, drowsiness of the driver, traffic on the roads, the vehicle and the F providing alerts to the driver. Using a statistically anthropometric face model the important facial points are automatically detected [2007]. Many researchers have focused on drivers behavioral measures using various techniques such as visual based detection and Physiological detection.

For face detection the Adaboost algorithm is used [2016]. Optic nurve fatigue correspondingly causes the eye blinking when the driver goes in state of reverie.

Fatigue and distraction detection can be observed by head orientation and head shaking is used only for fatigue detection.

Jorge Batista [1] proposed a system which represents a framework which combines a robust feature location of face with face modeling having elliptical shape to measure the drowsiness and fatigue of driver in 2007. The solution works with the two parameters that are computation of eyelid movements and attention of head point.

By using statistically anthropometric face model it detect the facial points automatically. It is one of the advantage in this paper. The measures the features of human face, it is calculated by anthropometry models and it deals with the biological area.

Shabnam Abtahi, Behnoosh Hariri, Shervin Shirmohammadi [2] proposed a system for monitoring and detecting driver’s drowsiness in 2011. For identifying drivers fatigue and drowsiness it can detect the various techniques like yawning, eye tiredness, eye movement, face tracking and drowsiness monitoring. The use of existing systems that monitor a vigilance level of drivers is important to prevent road accidents. Some of the main warning signs that can be measured or identified as indications of driver fatigue are : daydreaming while on the road driving over the center line, yawning , feeling impatient, feeling reacting slowly, heavy eyes, sleepy face, blinking of eyes and motion of lips.

For the purpose of the detection of the face region using the difference among two images. Drivers yawn is then tracked on the bases of the distance between the midpoint of nostrils and the chin uses Gravity-Center template to track the face. Detection of mouth corners we can use grey projection and Gabor wavelets.

Finally to detect yawning LDA is applied to classify feature vectors. Then, through spatial fuzzy c-means (s-FCM) clustering a mouth window is extracted from the face region, in which lips are tracked.

The advantage of the existing system is that yawning detection system is newly included which is not present in previous system. Also it recognizes face by using the face color and texture. The color shape can be recognize by RGB, YCbCR and HSV [2].

Ping Wang and Lin Shen [3] proposed a system to detect face region because of its high correct rate the AdaBoost algorithm is used in 2012. So then the final solution found is that the exact positions of driver’s eyes and mouth are placed depending upon their geometric features respectively.

The actual tests with current driving videos represents that our technique of detecting drivers drowsiness is based on eye as well as mouth features makes the conditions of detecting the driver’s reverie state wider and most accurate.

Finally, in short in the format of summary this existing paper represents the working of facial reverie state, state tracking, formatting, region location and AdaBoost algorithm are used.

The advantage of this system is that it is well and high accurate system and without influence from light.

Syed Imran Ali, Dr. Prashant Singh, Sameer Jain [4] proposed a user alertness identification system which is based on fatique detection in 2014. In this system the web camera continuously captures images of the subject. By using efficient image processing techniques it focuses on lips and eyes to monitor their behavior.

It firstly captures the image that is input RGB image and convert it into gray image. By using erosion and dilation techniques the gray image is converted into blur image. The Sobel edge detection filter algorithm is used to find the edges of blur image. After detecting the face, this image is cut into two halves eyes part and mouth part. Again the first halve i.e. eye part image is cut into two parts left eye part and right eye part. If the drowsiness is detected in these images then it generates alert.

background , also it is light weight and it requires less CPU execution time. 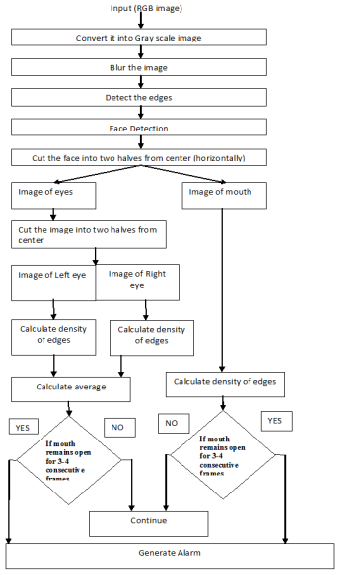 Fig 1. Flowchart of the system

Firstly the facial detection is done using Adaboost boosting algorithm. After that the various features are extracted. The eye analysis and mouth analysis is done. The analysis is done and based on that analysis the decision is taken.

Yantao Qiao, Kai Zeng, Lina Xu and Xiaoyu Yin [6] proposed a fatigue monitoring system which focuses on fusion of information, it is implemented and designed in smartphone. The driver’s fatigueness indicators are eye blinking, head nodding and yawning are detected. The face and eye blinks are detected by using Harr-like technique. And the mouth yawning is detected by using Canny Active Contour method.

In this system the new parameter is added for detecting the fatigue is head nodding i.e. head shaking.

The main advantage of this system is that it uses smart phone for detecting the fatigue of driver for preventing him from accidents and does not require other equipments such as camera.

Harr-like technique is used for the face and eye blinks detection. And for the mouth yawning detection Canny Active Contour method is used. By using this techniques the various facial features can captured to detect the reverie of driver. The main advantage of this system is that it does not require other equipment’s such as camera.

DETECTION USING FUSION OF MULTIPLE REAL” approach can be considered as advantageous.

In this way we have surveyed few techniques which are used for driver fatigue detection. Some of the technique or algorithm uses single facial feature to detect the fatigue of driver and prevent from accidents. From above mentioned approaches the last approach is having addition features to detect fatigue of driver. We can use the various facial features to detect driver’s drowsiness such as eye detection, face detection, yawning, head shaking. This approach is more advantageous in sense that it uses a new concept that is head shaking for the detection of driver fatigue because of these it will easily found the drowsiness of a driver. This system is based on smart phone so there is no need of other equipment’s.

3] Ping Wang, Lin Shen, “A Method of Detecting Driver Drowsiness State Based on Multi-features of Face” in Proceedings of the 5th International Congress on Image and Signal Processing (CISP 2012) – 2012.