Joe Tyler Roberts, the owner (sole proprietor) of Tyler’s Sports Bar (the Bar), saw a You Tube video about dogs who can catch food and had — what he thought — a brilliant idea. Joe contacted an acquaintance who is a dog breeder to see if he could purchase a dog who is trained to catch footballs. Joe’s idea was to use a dog who can catch footballs as a promotion to increase patronage at Tyler’s Sports Bar when the Philadelphia Eagles played, particularly on Sunday, Monday and Thursday night games.Joe eventually purchased a young German Shepard from the aforementioned breeder who trained the dog to catch a football in his mouth, on the run. The young dog, aptly named Carson, was taught to jump and catch a ball and turn in the air after the catch and then place the ball on the ground in a “touchdown celebration.” Joe modified the outside patio area of the bar so that Carson could run about 125 feet in a penned off area to catch a football. However, the area was not totally enclosed as it had a fence only three feet tall with many outdoor dining tables on the other side of the fence. Joe and his employees allowed virtually any customer to throw the ball to Carson.The advertising campaign was a success and so was Carson. On the third home game of the season, it was a hot and humid Sunday night and the bar was filled to capacity and Carson caught 80 catches by halftime. To Joe, Carson seemed visibly lethargic and out-of-sorts. It was the first time Carson performed late at night or on a very humid day.Very soon after halftime, about 10:30 in the evening, after retrieving about another twenty balls, a drunken patron threw a football out of the Carson’s penned-off area and the ball landed right on a table and sent food and drinks flying. A customer at the table attempted to loudly shoo Carson away from the table and accidentally bumped into Carson as Carson was attempting to retrieve the football. Consequently, Carson bit the patron, a Mr. Jerry Jones, squarely and deeply on the forearm causing swelling, bleeding and eventual bruising. To make matters worse, Carson’s rabies shots were not current and Mr. Jones had to endure a series of rabies shots. Carson had grown to 24 inches and 80 pounds on the night he bit Mr. Jones. Carson never bit anyone before.After ignoring two letters from Mr. Jones’ attorney demanding payment of medical bills and additional compensation for pain and suffering, the Bar is now forced to defend a lawsuit.Joe is apoplectic and is of the opinion that every dog is entitled to one bite and that Mr. Jones caused his own problems by yelling at Carson and accidentally bumping him. The attached case, Clark v Clark, 215 A.2d 293 (Pa. 1965) is the only case I can find that remotely fits our fact pattern.Please read the case (and the appropriate part of the text and the website provided) and give an opinion on whether Joe and the Bar should be liable to Mr. Jones.Answer the following questions based on Clark v. Clark, the text and the website.C. Questions:1. What is the legal issue for the court to decide? (one sentence)2. Is the Joe and the Bar legally liable for the injuries sustained by Mr. Jones as a result of Carson (the dog) jumping out of his semi-enclosed area to retrieve the thrown ball?Why or why not?3. Is it a defense that Carson was not vicious and never bit anyone before this incident?4. Is it a defense that this was the first time that Carson went into the stands to retrieve a football? Is there any defense(s) that apply and do you think there is a defense that will help Joe and the Bar?Answer preview: 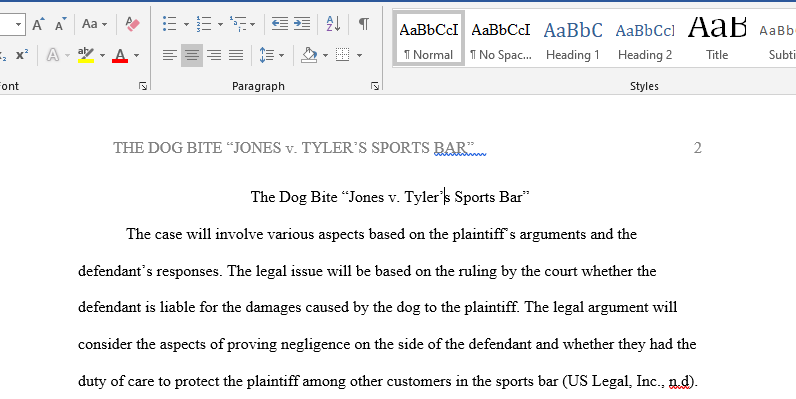 Never use plagiarized sources. Get Your Original Solution for
Discuss The Dog Bite “Jones v. Tyler’s Sports Bar”
Get your expert answer just from $9.99/Page

100% Original paper Customized to your instructions!

Do you want a ready solution for this assignment? Click HERE to buy a previously written solution.

Describe how events in your own life to date have followed a typical or non-typical trajectory, and relate to the readings

In Part B of Assignment 2, you are going to practice thinking like an evolutionary psychologist. First, read Chapter 3 in the Wade et al. textbook....

END_OF_DOCUMENT_TOKEN_TO_BE_REPLACED

Describe how a country can measure its income inequality

Assignment Details Prior to beginning work on the Final Paper, read Steven Strauss’ article, The Connection Between Education, Income Inequality,...

END_OF_DOCUMENT_TOKEN_TO_BE_REPLACED

The Creation of a Regulated Economy

Assignment Details The government of the United States of America in the period between the year 1865 to the period of second world war made various...

Write My Essay
Chat now
Powered by Studykind
Hello! Welcome to to our whatapp support.